"'Virus Mania' will open your eyes. As soon as you realize that you have already been deliberately manipulated by politics and the media for decades with recurring misinformation, the foundation is laid to break free from the current COVID mass psychosis."
Prof. Dr. Klaus Steger, molecular biologist with more than 25 years of experience in PCR and
co-author of the Corman-Drosten Review

"Rationality ex post facto.—Whatever lives long is gradually so saturated with reason that its irrational origins become improbable. Does not almost every accurate history of the origin of something sound paradoxical and sacrilegious to our feelings? Doesn't the good historian contradict all the time?"

Request for support for my court cases:

Please make the support with the purpose "Donation for legal corona proceedings of Torsten Engelbrecht" to the following account:

I would like to thank you very much. All submissions will of course be used exclusively for the listed procedures, which are of enormous importance, since they concern the central aspects of the Corona policy (term "Corona denier", Facebook censorship, tests and masks). In addition, the following in detail:

My lawsuit against the fan store of the fottball club FC St. Pauli is about an article that was published on the website of the fan store and in which not only the entire critical Corona movement is moved into the corner of people with "anti-Semitic murder fantasies", but in which I am defamed as a "Corona denier" – a fate that virtually every critic of Corona politics shares with me. With my lawsuit I now want to have it established by the courts that this term "Corona denier" represents a false factual claim and that its use is ultimately aimed only at personally disparaging a person. Our lawsuit is also based on a virtually unique expert opinion on the term "corona denier" by a professor of linguistics/linguistics.

For those who are interested in how some people at FC St. Pauli and especially the so-called "Antifa", which is very close to the club, tick, I would like to recommend my article "FC St. Pauli: Home of Fake-Antifas!,", published on 19 June 2021 on rubikon.news. In it I also go into how the blog of the St. Pauli fan store "Magischer FC" defames, ignores and tells the untruth. I myself have lived on St. Pauli for more than 20 years and still feel the original widespread attitude of standing up for a just and free society as very important. On the subject of Corona, however, there was unfortunately nothing at all to be seen of this spirit at the fan store and the "Antifa" ...

My lawsuit against Facebook/Meta is about the fact that the company has labeled my OffGuardian article "COVID-19 PCR Tests are Scientifically Meaningless" as "false information", based on a text of its so-called fact checker PolitiFact. The ruling on this has been available in writing since the end of August 2022. Rafael Lutz of Transition News wrote the article "Engelbrecht vs. Facebook: Tech giant must remove notice of 'misinformation'", published on September 5, 2022.

As far as testing in schools is concerned, I have filed a lawsuit. It is being handled by the Hamburg lawyer Ronald Brandes.

And as far as the mask certificates of my two children are concerned, the state of affairs is as follows: On the one hand, fine proceedings have been initiated against my two children, in which the issue of mask certificates also plays a central role. Secondly, at the end of January 2022, I submitted a medical certificate from my son to his principal, who rejected it on the "grounds" that she did not find it credible that my son had actually been examined by the doctor. We were able to easily refute this "argument" by presenting the principal with a corresponding confirmation from the doctor. But instead of accepting the certificate, she simply forwarded it to the legal department of the school authority. And at this authority, the certificate is now since mid-February 2022, without the will to recognize the certificate to recognize / to bescheiden. Now I am filing an action for failure to act. In these proceedings I am anwatlich represented by the already mentioned Ronald Brandes as well as by Anne Rose.

Tests and mask obligation at schools do not exist at present (September 2022) admittedly. But it exists, straight also in Germany and above all also in Hamburg, to fear that sooner or later both or one of both is again introduced. Therefore, I would like to continue to be legally active in these fields.

Many thanks again to all who want to support me here!

Lawsuit against Facebook (with focus on the PCR test)

In February 2021, the lawyer Patrick Rehkatsch filed a lawsuit on my behalf against Facebook. Reason: PolitiFact, one of Facebook's so-called fact checkers, classified my OffGuardian article "COVID-19 PCR Tests Are Scientifically Meaningless" (published on June 27, 2020; co-author: Konstantin Demeter) as "false information." How unsubstantiated this is, we clarify in our open letter to PolitiFact, which the OffGuardian published on July 31, 2020.

Missing Proof for HIV, SARS-CoV-2 etc.
due to lack of particle purification

A decisive thesis of "Virus Mania" is that there is no evidence that the particles that have been given names like HIV, H5N1 or SARS-CoV-2 are disease-causing viruses—and that these particles may very well be of non-viral origin. One central reason for this is that the particles claimed to be viruses have not been purified in the relevant studies. 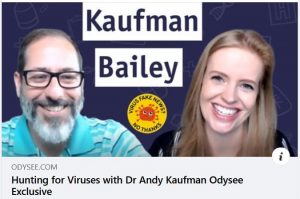 Regarding so-called "HIV", even Luc Montagnier conceded in an interview with Djamel Tahi:  „I repeat, we did not purify!“ And in the context of so-called "SARS-CoV-2," several authors of the most relevant studies I have approached as well as the Robert Koch-Institute conceded that they had not performed particle purification. They answered as follows (see also my OffGuardian article "COVID-19 PCR Tests Are Scientifically Meaningless", co-author: Konstantin Demeter):

Michael Laue (Robert Koch-Institute): "I am not aware of a paper which purified isolated SARS-CoV-2" (see his Email).

Leo L. M. Poon; Malik Peiris (Nature Medicine): “The image is the virus budding from an infected cell. It is not purified virus” (see Email).

Sharon R. Lewin et al. (The Medical Journal of Australia): "“The nucleic acid extraction was performed on isolate material recovered from infected cells. This material was not centrifuged, so was not purified through sucrose gradient to have a density band as such. The EM images were obtained directly from cell culture material” (see Email).

Myung-Guk Han et al. (Osong Public Health and Research Perspectives): “We could not estimate the degree of purification because we do not purify and concentrate the virus cultured in cells” (see Email).

That such "purification" is an indispensable prerequisite for detecting viruses and creating valid antibody and PCR tests based on them is also stated by scientists who are the most renowned in the world, among them:

White and Fenner: “It’s an essential pre-requisite.”
Luc Montagnier: “It is necessary.”
Robert Gallo: “You have to purify.”
Marcel Tanner: "If a pure SARS-CoV-2 isolate cannot be documented by the IVI [=Institute of Virology and Immunology] in Bern, then we have a problem.” (siehe here).
Françoise Barré-Sinoussi: “... you have to purify the virus from all this mess.”
Jean-Claude Chermann: “Yes, of course… Absolutely.”
David Gordon: “It’s a natural step from obtaining the virus in cell culture to then obtain purified virus.”
Dominic Dwyer: “The purification, as far as one can go, is important in analysis of any virus or bacteria, for that matter well.”
Wan Beom Park: “In the outbreak situation, isolation of causative virus is indispensable for developing and evaluating diagnostic tools, therapeutics, and vaccine candidates.”

What is the proper way to isolate, characterize and demonstrate a new virus is outlined on the website of Dr. Andrew Kaufman, MD.

"Phantom Virus 'SARS-CoV-2'" Brochure
(in German; base: my OffGuardian article).

Reputable Experts Stating that There Is No(!) Proof that the Particles Named SARS-CoV-2 Belong to a Disease-Causing Virus