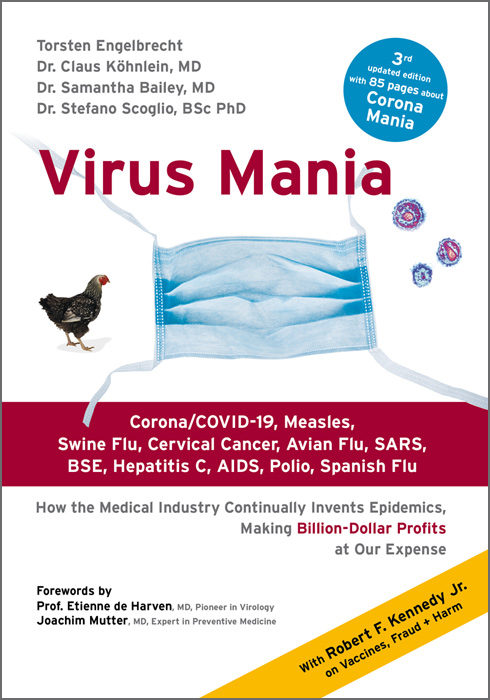 Now available: The 3rd greatly expanded edition.
With more than 80 pages about the COVID-19 insanity.
As print and ebook edition (new ISBN's!)!

If one follows public pronouncements, the world is repeatedly afflicted with new terrible virus diseases. As the latest horror variant, the so-called coronavirus SARS-CoV-2 dominated the headlines. The population is also terrified by reports of measles, swine flu, SARS, BSE, AIDS or polio. However, the authors of "Virus Mania," investigative journalist Torsten Engelbrecht, Dr. Claus Köhnlein, MD, Dr. Samantha Bailey, MD, and Dr. Stefano Scoglio, BSc PhD, show that this fear mongering is unfounded and that virus mayhem ignores basic scientific facts: The existence, the pathogenicity and the deadly effects of these agents have never been proven.

The book "Virus Mania will also outline how modern medicine has pushed direct detection methods aside and uses dubious indirect tools to prove the existence of viruses such as antibody tests and the polymerase chain reaction (PCR). The alleged viruses may be, in fact, also be seen as particles produced by the cells themselves as a consequence of certain stress factors such as drugs. These particles are then "picked up" by antibody and PCR tests and mistakenly interpreted as epidemic-causing viruses.

The topic of "Virus Mania" is of pivotal significance. Drug makers and top scientists rake in enormous sums of money by attacking germs and the media boosts its audience ratings and circulations with sensationalized reporting (the coverage of the New York Times and Der Spiegel are specifically analyzed). Individuals pay the highest price of all, without getting what they deserve and need most to maintain health: enlightenment about the real causes and true necessities for prevention and cure of their illnesses.

"The book 'Virus Mania' has been written with the care of a master-craftsman, courageously evaluating the medical establishment, the corporate elites and the powerful government funding institutions. It is the result of expert knowledge and great attention to details. I am editing standard medical textbooks myself, so Iesteem the decades of efforts needed to research and write a book like this."
Wolfgang Weuffen († 2013), MD, Professor of Microbiology and Infectious Epidemiology

"The book 'Virus-Wahn' can be  called the first work in which the errors, frauds and general  misinformations being spread by official bodies about  doubtful or non-virus infections are completely exposed."
Gordon T. Stewart († 2016), MD, professor of public health and former WHO advisor

Torsten Engelbrecht works as an investigative journalist in Hamburg. In 2009, he received the Alternative Media Award for his article “The Amalgam Controversy.” He was trained at the renowned magazine for professional journalists Message and was a permanent editor at the Financial Times Deutschland, among others. As a freelance journalist, he has written articles for publications such as OffGuardian, The Ecologist, Süddeutsche Zeitung, Neue Zürcher  eitung, Frankfurter Allgemeine Sonntagszeitung, Rubikon, Freitag, Geo Saison, Greenpeace Magazin. In 2010, his book “Die Zukunft der Krebsmedizin” (The Future of Cancer Medicine) has been published, with Claus Köhnlein, MD, and two other doctors as co-authors.

Dr. Claus Köhnlein, MD, s a medical specialist of internal diseases. He completed his residency in the Oncology Department at the University of Kiel. Since 1993, he has worked in his own medical practice, treating also Hepatitis C and AIDS patients who are skeptical of antiviral medications. Köhnlein is one of the world's most experienced experts when it comes to alleged viral epidemics. In April 2020, he was mentioned in the OffGuardian article "8 MORE Experts Questionig the Coronavirus Panic." An interview with him by Russia Today editor Margarita Bityutskikh, published on Youtube in September 2020 on the topic "fatal COVID-19 overtherapy," achieved 1.4 million views within a short time.